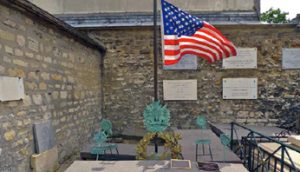 Because of the close, historical ties between the United States and France, going back to the American War of Independence (1775-1783), there are many landmarks in France celebrating French American friendship – and many excellent guides covering them.

Some of these monuments have a special meaning for the members of NSDAR, who have been present in France for over a century.

Other landmarks have been “adopted” by the Rochambeau Chapter, NSDAR, since its creation in 1934, as places where its members gather to pay tribute to the long-lasting French American friendship which unites them in their common heritage and unique bi-cultural tradition.

This guide to NSDAR monuments and landmarks in France is presented by the Rochambeau Chapter, NSDAR, as part of its “Open Hospitality” initiative to promote bi-cultural exchanges between its members, associate members, and other NSDAR members, direct descendants of French or American Patriot ancestors who fought for the cause of American independence. We invite you to check how this document is protected under copyright laws. [REFERENCES]

We have tried to be exhaustive, but other NSDAR landmarks in France may have escaped our attention – please let us know of any other information relevant for this project.